* This is my last post before taking a two-month summer break. I will resume the liturgy lessons in September.

“Yet God my King is from of old,
working salvation in the midst of the earth.
You split open springs and brooks;
you dried up ever-flowing streams.
Yours is the day, yours also the night;
you have established the heavenly lights and the sun.
You have fixed all the boundaries of the earth;
you have made summer…”
– From Psalm 74

“Every good gift and every perfect gift is from above,
coming down from the Father of lights,
with whom there is no variation or shadow due to change.”
– James 1:17 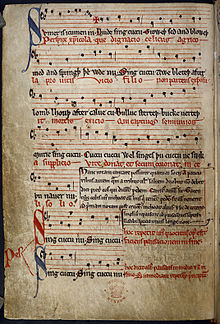 One of the oldest extant songs in the English language is about the coming of Summer. “Sumer is icumen in” (Summer is a-coming in) is an 800-year-old round (‘rota’), written in the 13th century. Modern English as we know it did not really develop until the 14th century, so here is the original in middle English with translation listed beside.

I read this to my kids last night at dinner. It made them giggle. They laughed at my Beowulf accent, but mostly it was that line about the farting stag. I told them that all the animals were so excited for summer that they couldn’t contain themselves. They had to sing and dance and make a joyful noise of every kind!

In the original manuscript of this song, listed underneath the old English lyrics, there is a separate Latin text, which is translated this way:

“Look, O lover of Christ, what condescension!
The heavenly husbandman, because of a fault in the vine,
not sparing his son, exposed him to the ordeal of death;
and he brings back the half-dead prisoners from torment to life,
and crowns them with himself on the throne of heaven.”

That’s quite different from the original text, but I love the juxtaposition of the two, because it mingles the music of the gospel with the sounds of summer. And why should not the two be in sweet harmony? Summer is a time of joy, rest, and peace, when everything is being renewed with full growth and the sun shines with warmth on the whole earth. This sounds just like the full effect of the gospel. Martin Luther put it this way.

Alleluia indeed! You can’t blame the animals for all the cuckoo and hullabaloo! In the warmth of summer they are basking in a beam from the glory. Gregory of Nazianzus wrote about this all the way back in the 4th century:

“O Light that knew no dawn, that shines to endless day,
All things in earth and heav’n are lustered by thy ray;
No eye can to thy throne ascend,
Nor mind thy brightness comprehend.”

My point in saying all this is simple, and it has already been said a million times in a billion ways. The natural world and all the created beauty around us is a ceaseless symphony of perpetual praise, a relentless, rollicking rhapsody for the Ruler and Redeemer. On this point, Psalm 19 is absolute perfection:

“The heavens declare the glory of God, and the sky above proclaims his handiwork.
Day to day pours out speech, and night to night reveals knowledge.
There is no speech, nor are there words, whose voice is not heard.
Their voice goes out through all the earth, and their words to the end of the world.”

And, after that summary, the psalmist begins to get…well…summery:

“In them he has set a tent for the sun,
Which comes out like a bridegroom leaving his chamber,
And, like a strong man, runs its course with joy.
Its rising is from the end of the heavens,
And its circuit to the end of them,
And there is nothing hidden from its heat.”

As you bask in the sun this summer, remember who set it on its course, who created it and sustains all that it illuminates. This is he whom the ancient Greeks called ‘Helios,’ and he is really just a hymn born in heaven, a gazillion-watt token of God’s glory. The Sun’s beams are designed to bless you and beckon you to behold the Bridegroom who calls you to himself and makes you his own. Simply put, the warmth of summer should melt your heart with the love of Jesus; the season itself being a shining sign of His splendor. May all the wonders of summer whisper to you the Word, and may they lead you to worship Christ. He is the Way and He is worthy!

In the summer of 1662, an anonymous German hymn text appeared in a manuscript in Münster, Germany. It was known and beloved in Germany for several generations, but its worldwide fame came two centuries later (in 1842) when it was translated into English and paired with a beautiful Silesian folk tune. There is perhaps no greater hymn that acknowledges the beauty of creation as an emblem of its Maker, whose beauty “doth all things excel.” This hymn reminds us that all of nature, from the fairness of the flower to the majesty of the mountain, are not ends unto themselves. The world is charged with the grandeur of God, and it is a tabernacle shot through with transcendence. May this timeless hymn be the theme song for our summer:

Fairest Lord Jesus, ruler of all nature,
O thou of God and man the Son,
Thee will I cherish, Thee will I honor,
thou, my soul’s glory, joy, and crown.

Fair are the meadows, fairer still the woodlands,
robed in the blooming garb of spring:
Jesus is fairer, Jesus is purer
who makes the woeful heart to sing.

Fair is the sunshine, fairer still the moonlight,
and all the twinkling starry host:
Jesus shines brighter, Jesus shines purer
than all the angels heaven can boast.

Beautiful Savior! Lord of all the nations!
Son of God and Son of Man!
Glory and honor, praise, adoration,
now and forevermore be thine.