The story of Covenant Presbyterian Church is a story of God’s faithfulness to His people.

Covenant Presbyterian Church has been part of the Issaquah community for over 50 years. The church of Jesus Christ has spread throughout the centuries as the Holy Spirit has faithfully carried out His work. A small group of believers meeting in a home for Bible study and prayer has often led to the establishment of an organized church. Covenant Presbyterian Church of Issaquah began in this way.

Summer 1957-Summer 1958
Dr. and Mrs. Homer Perkins and family moved to Preston from Seattle. At this time, there wasn’t a strong Reformed work on the east side of Lake Washington. The Perkins began a Bible Study in their home, and in the summer of 1958 Sunday School classes were added.
Fall 1959
Classes were moved to the lssaquah Funeral Home, morning services were added, and the name of Covenant Presbyterian Church was given. Rev. Joseph Green, of Bellevue Christian School, served as pastor on Sunday mornings.
January-April 1960
Services were moved to the I.O.O.F. (Odd Fellows) Hall. Dr. Perkins and Mr. Harrah, elders of the Evangelical Church of Seattle, took responsibility as acting elders of the newly formed church. They communicated with Mr. Robert Scott, who was completing his work at Covenant Theological Seminary in St. Louis. Mr. Scott came for an interview, finished his work at Covenant, and moved to Issaquah, with his wife, Libby, and two small children. They arrived in time for the Easter service in April of 1960. About the same time, Mr. and Mrs. Thomas Cowan initiated a building fund with the proceeds from the sale of personal property.

Prayer accompanied the work of Covenant Presbyterian from its inception.

1962
Covenant Presbyterian moved to Gibson Hall. In August of 1962, Mr. and Mrs. Paul Blomberg and their family moved from Seattle to Mine Hill, a short distance from Gibson Hall. They graciously opened their home for the adult Sunday School class.
February 1963
The congregation decided to rent Gibson Hall all day when necessary. On February 24, 1963, 41 adults and children were received on confession of faith as charter members.
April 7, 1963
Covenant Presbyterian Church was organized on April 7, 1963 with officers elected and committees appointed. There was something for everyone to do.

April 1963-1970
At about this time, the attractive property of Mr. and Mrs. Leon G. Bailey on the Redmond Road north of Issaquah, one and one-eighth miles beyond Hwy 10, was located and considered favorably. The Baileys, an older couple, wished to dispose of their three and one-half acres, including its several buildings. The cement block farm building was large enough for the main part of the chapel. (The legend is it was a chicken coop at one time. The truth is it was built for that purpose but was never “occupied”).

Their brick home would be suitable for a manse and near it, and connected by a walk, was a small building that could be converted into a study. A large open field and a substantial patch of blueberry bushes, once removed, would give space for parking and for erecting a church building when membership increased sufficiently. A nice hollow with a lovely grove of evergreen trees would make a pleasant place for youth meetings in summer and for picnics for all. The property seemed to meet many needs. The members looked over the property, prayed about it, and decided to make the purchase.

The Chapel was sufficiently ready for the first service on Easter Sunday, April 25, 1965. Later, through the building fund and special contributions, Elder Blomberg led the construction of a two story Education Building, which is still in use today for Sunday School classes and also Covenant Christian Middle School. The “Ed Building” was dedicated on Easter Sunday, March 29, 1970.

God again was extremely faithful and gracious to keep the church going.

1996-present   Rev. Eric Irwin
Pastor Irwin, his wife Lisa, and their children arrived in June of 1996 after his graduation with a Master of Divinity from Covenant Theological Seminary. Eric has brought a deep love for God and high view of scripture to CPC. He also continually points us to walking “coram deo’ (before the face of God). His dry sense of humor is a blessing to all, as he faithfully teaches us from God’s Word and tenderly leads us to walk closer to the Father. He is an avid reader and cyclist while maintaining close ties to his family and flock at CPC. Lisa is committed to fervent prayer on behalf of the families at CPC and is known for her warmth and generosity of spirit.

2003-2006
It became obvious that Covenant Presbyterian was outgrowing its original facilities. The church offices were located by this time in a portable module (complete each year with the annual ladybug hatch) and services were overflowing in the old Chapel. After a significant capital fund project, the decision was made to build a new main Chapel on the edge of the field. A building committee was formed and architect hired. Ground was broken in 2003. Long-time member Pete Biege played a significant role in moving the project from concept to fruition along with our dedicated Building Committee, who spent countless hours over several years. A dedication celebration was held June 4, 2006. 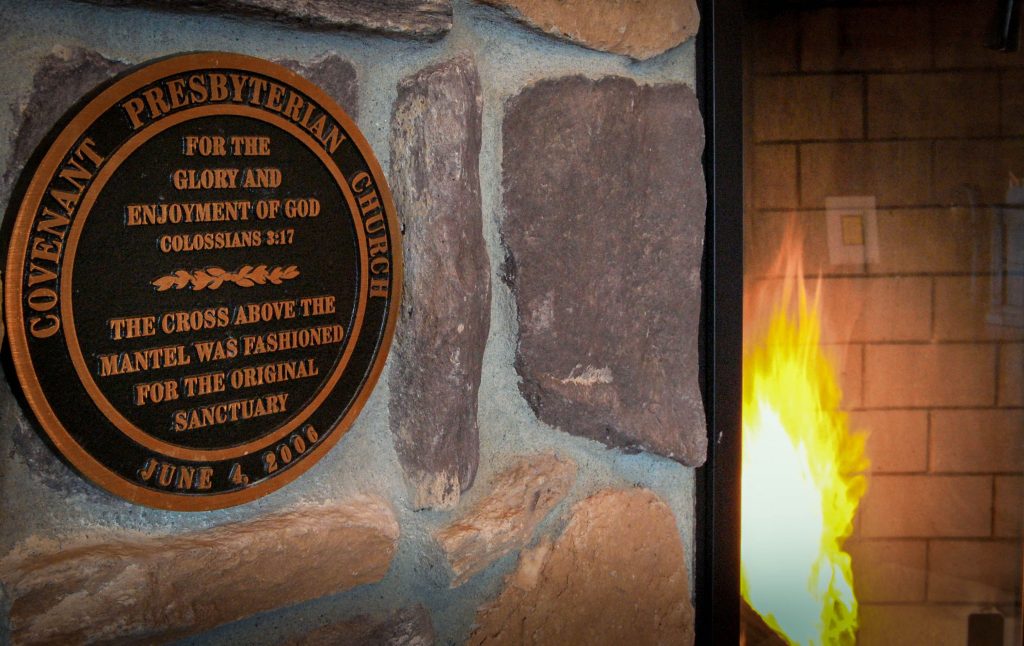 In tribute to our history and to God’s faithfulness, the original 2×4 wooden cross made by Paul Blomberg was transferred from the old Chapel to its present place above the fireplace in the new Narthex.

God has answered specific prayers and opened new doors for the ministry of Covenant Presbyterian Church.

Property Purchase
For many years, CPC has been praying about the possibility of purchasing the property adjacent to our parking lot entrance. During those years, CPC has shown the love of Jesus to the family who lived there, reaching out to connect with these neighbors. After the owner passed away last summer, the property came up for sale in September 2018. As per the owner’s wishes and her daughter’s choice to honor her mother, CPC was given the first option to buy the property.

Other potential buyers were in line with more money to offer, and our option was to purchase the property largely sight unseen (except for the exterior). The Session chose to step out in faith, the CPC church body came together with many different people offering talents and treasures, and God blessed CPC with this property. The sale closed in December 2018.

The long-term plans for this property center around CPC’s vision for providing Christian education for future generations.

Through the ages, the church has been a central instrument in education. As believers in Jesus, we hold that being able to learn is part of what it means to be made in God’s image. Learning is meant to lead us toward a better understanding and ability to express the truth of Christ in beautiful and winsome ways. Therefore, it is only fitting that this pursuit of learning and truth would happen in the community of the classroom.

However, we live in a world that is broken by sin, and humanity’s search for meaning becomes futile when it is severed from God’s revelation in Scripture. The classroom is becoming an increasingly polarized place where meaning and truth reside in each individual and his or her truth claims. The school system today tends to be a manifestation of the mainstream culture instead of an environment that can help students and teachers to love God’s truth with mind and heart.

In 2018, the Lord began tangibly answering the long term prayers of families, pastors, and educators at Covenant Presbyterian Church. A launch committee of four couples came together—the Berts, Harpers, Loudons, and Orths—and over a few months, a small band of teachers for a new high school took shape. In September 2019, the doors opened for Covenant Christian High School—an opportunity to humbly pursue a different way of education.

We know the task at hand is large and will require prayer, thoughtfulness, preparation, and sacrifice, but we set out with certainty that the goal is worth the effort as we pursue our mission: Seeking to honor and glorify God in the education of covenant children by teaching them in the light of holy Scripture to walk the kingdom-minded path.

Covenant Christian Middle School
In 2005, Rich Loudon and his wife, Sara, were instrumental in starting CCMS—Covenant Christian Middle School. The school meets in the Upper Education Building. They started with a specific teaching mission in mind. The session decided to put the fellowship hall of the old chapel into use as a two-day a week middle school to minister to the needs of the congregation’s home school families. In the fall of 2005 Covenant Christian Middle School opened its doors to twenty-one students from CPC and the surrounding community. Sara teaches a Christ-centered history-based language arts program aimed at the heart of her students. The goal of the school is to prepare students for their future academic endeavors by guiding them to an understanding of God’s sovereignty in history and His indelible mark of creation, fall, and redemption that runs through all literature.

Special mention should be given to how God blessed us for many years with longtime and former Elder Kurt Kreiger leading the congregation with the Call to Worship most weeks. Kurt was an ordained officer of the PCA for over 30 years.